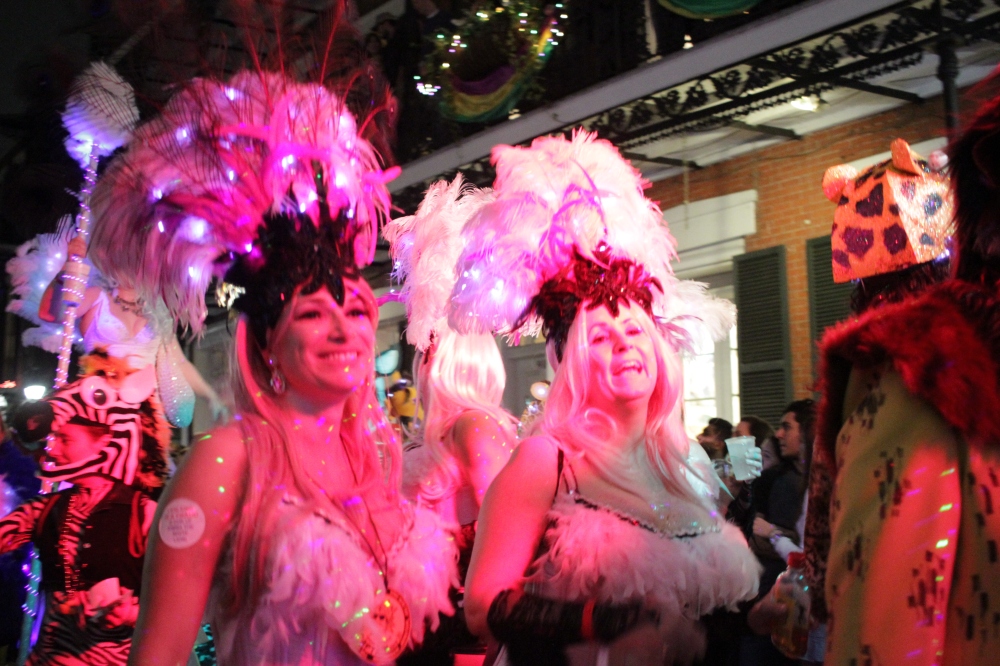 This is “Mardi Gras for Beginners,” by a beginner, because this is my first real Mardi Gras. I’ve come for a day-trip multiple times, caught a few super-krewes in action, and spent the most amazing weekend here during Mardi Gras 2006, with some freshly-returned Katrina refugees. I witnessed a lot of people tackle-hugging each other at such diverse venues as Port-o-Call, Johnny White’s (RIP), and Marigny and French Quarter homes.

But this is the first year I am having the COMPREHENSIVE MARDI GRAS EXPERIENCE, aka weeks and weeks of costume-parties, hippie-art-balls, lower-budget but way-clever marching-only parades (fueled by artists and lovers and distinctive hand-crafted throws), King Cake by-the-slice (while I slog away at the ole copywriting at ye corner coffee shop), and endless house parties, courtesy of my generous duplex-mate (and lifelong New Orleanian) and her eclectic, theatrical friends. And it has been a fantastic education!

First off, the basics: did you know that Carnival season officially starts on January 6th, also known as the Feast of the Epiphany? Because I didn’t. Growing up a mere two hours and change away from the Big Easy, this fact managed to elude me. But the first parade of the season is thrown by Krewe de Jeanne d’Arc on Twelfth Night, which also happens to be Jeanne’s birthday. (The maid of Orleans would have been 607 this year!)

Jeanne’s parade is a highly unique walking affair through the French Quarter, with floats that take you through her life in chronological order. There are medieval farming peasants and animals, representing Jeanne’s humble beginnings, and various specters, representing the teenage Jeanne’s “visions,” which gained her an audience with King Charles, and Jeanne on horseback, riding off to battle to challenge England in the Hundred Years War, after she convinced Charles to let her dress as a man and fight. There are representations of her trial, after she was captured and Charles refused to come to her rescue, and groups of nuns and bishops—the church leaders who turned against her. Then come effigies of her fiery death at 19, and finally, at the end of the parade, representations of her canonization as the patron saint of France in 1920, 489 years after her death.

It’s dark and mysterious and all very queer and gender-bending (in other words, very New Orleans), and it’s a perfect, little-known (outside of the city) prelude to the ruckus of Carnival season.

After Twelfth Night, you can start buying King Cakes all over town, but parade-wise, things are pretty calm for about a month. Then there’s Chewbacchus in the Marigny (UPDATE: a MG vet told me that in previous years this parade has been a few weeks later, so who knows when it will come in 2020), a popular and really long (like three hours!) walking celebration of nerdom. The parade mascot is “the Sacred Drunken Wookiee,” and the floats reference insider sci-fi trivia. So if you’re a Trekkie or a Whovian or you’re really into cos-play, this is the parade for you.

This French Quarter walking parade was brand new this year and is led by the Green Absinthe Fairy.  I missed the parade, but Nola.com did a great write-up with pics about the parade of “gentrifiers protesting gentrification.” The throws I’ve seen from this parade are handmade and exquisite. I know a few folks in Krewe of Full Bush, self-described, as “a Mardi Gras Krewe of Fuzzy Humans” (something I can 100% get behind!), and their throws included fringed whitie-tighties and handmade merkins (pubic wigs, fyi). From all accounts, this parade was intimate and funky, fragile and magical. 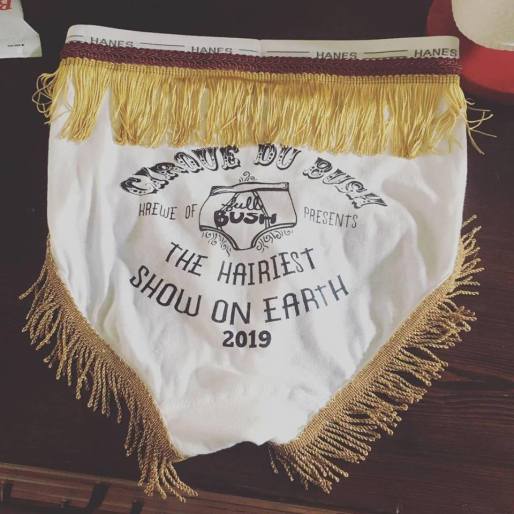 This year, the theme was “City of Yes, Yes, Oh God, Yes!,” and the mule-drawn floats and marchers satirized pedophilia in the Catholic church (lots of topless bishops and priests with giant genitalia), #MeToo and the shame of Kavanaugh’s Supreme Court confirmation, Ruth Bader Ginsberg’s general heroism, and Trump’s general horridness (aptly illustrated by a play on the Lion King, a “Lyin’ King” float, followed by marchers dressed as jungle animals). 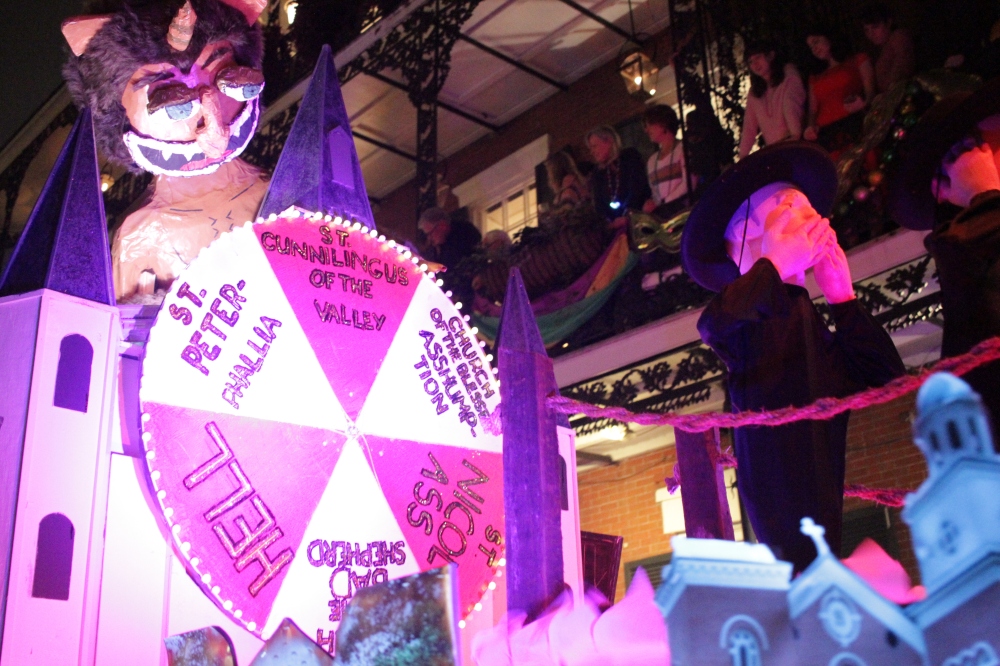 In local issues, there was the “Road Twerk” crew (if you’ve ever driven in this city, you’ll understand) and an homage to the altogether creepy (and dubiously legal) “crime cameras,” which mostly “catch” hardened speeders and mail you $100 tickets and a photo of your car, with no actual proof that you were speeding or even the driver of your car at that precise moment. 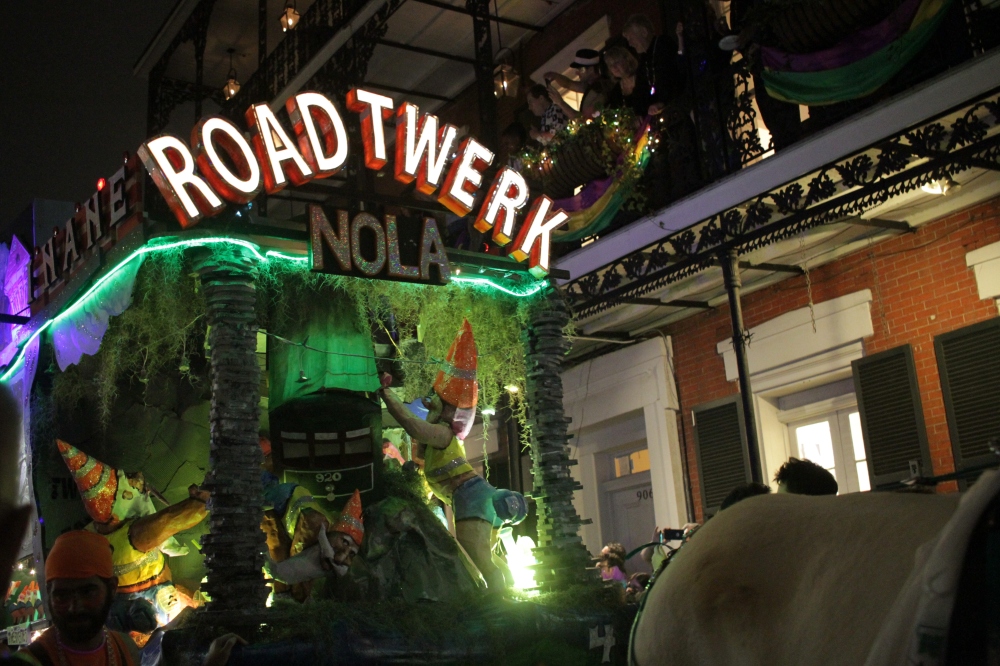 In it’s 10th year, Krewedelusion is the tiny, artsy walking parade that spearheaded the post-Katrina trend of tiny, artsy walking parades and gave all the creative newcomers and hurricane relief activists (who stayed, because who doesn’t come here and want to stay forever?) an outlet for their clever energy and platforms. (Before Krewedelusion, there was the pre-Katrina—by seven months—Eris parade, but Eris has never become “official,” i.e. permitted.)

Krewedelusion was largely created by newcomers, aka “outsiders,” but it’s a hyper-local parade that satirizes local issues—unless you’re a super-savvy tourist, you may not get the joke. This year’s parade, “Think Globally, Act Locally,” took on Airbnb for gutting NOLA neighborhoods, encouraged us all to “take the L train to Bywater” (a joke about gentrification, by gentrifiers, who have been around enough to be familiar with the fall-out from both Brooklyn’s most infamously post-hip neighborhood and New Orlean’s), and raised awareness about the trash in our streets that ends up in our storm gutters and ultimately, in the Mississippi River (with marchers in costumes made from 500 plastic shopping bags—the average number any given New Orleans resident uses in a year)—among many other grievances. 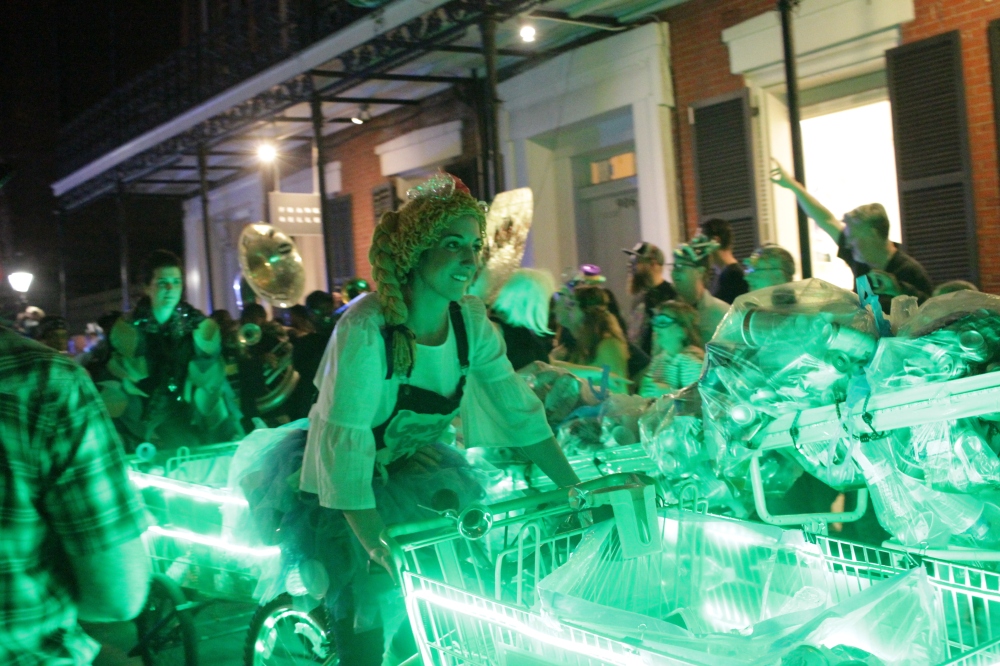 It’s name means “petite” in Cajun dialect, and even if it weren’t the only “micro-krewe” in Mardi Gras, I’m pretty sure the Marigny/ Bywater’s ‘tit Rex would outshine the competition. This short, wee parade is scrappy, sassy and adorable, with marchers pulling tiny floats made from shoe-boxes on wheels. ‘tit Rex was founded by artists, in order to subvert the super-krewes, and the throws are often handmade and utterly precious—tiny books, itsy flowers, dollhouse food covered in glitter.

The thematic explorations, however, are not-so-precious. This year’s parade featured multiple sex-work floats (a critique of controversial state laws that confuse consensual sex work with human trafficking), a painstakingly detailed miniature of Judy Chicago’s famous 1979 feminist work, “The Dinner Party,” which I’m guessing was a nod to #metoo, a public scolding of Trump involving a wall and the trademark “Be Nice or Leave” folk art sign created by NOLA’s own Dr. Bob, a Mister Roger’s float (“A Paragon of Decency”) referencing the recent documentary, and a local take, “A Modicum of Gleasoncy,” featuring the beloved Saints player, Steve Gleason, who is dealing with ALS. 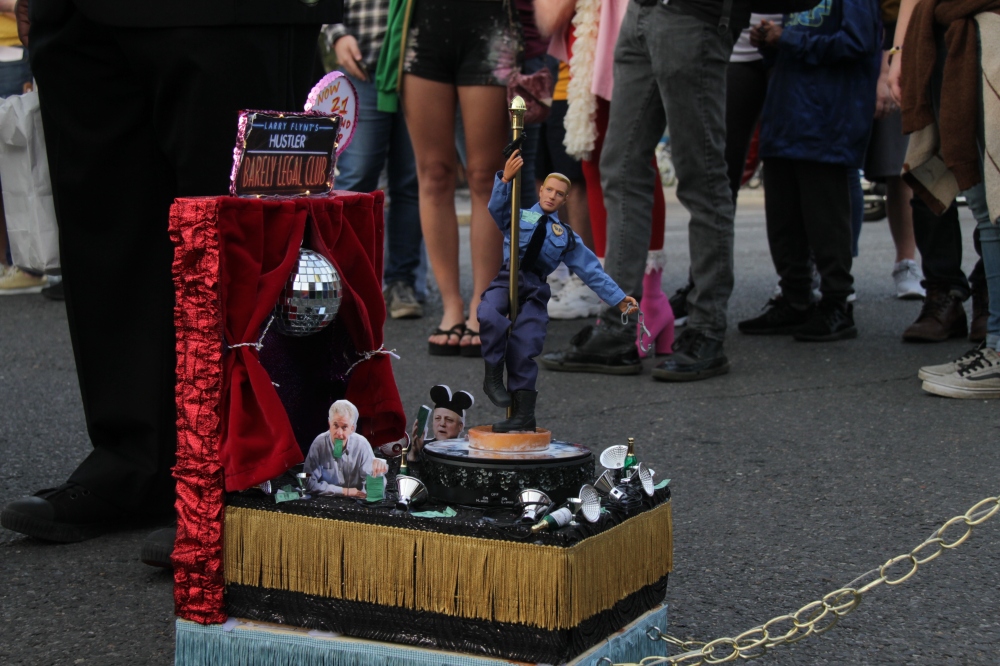 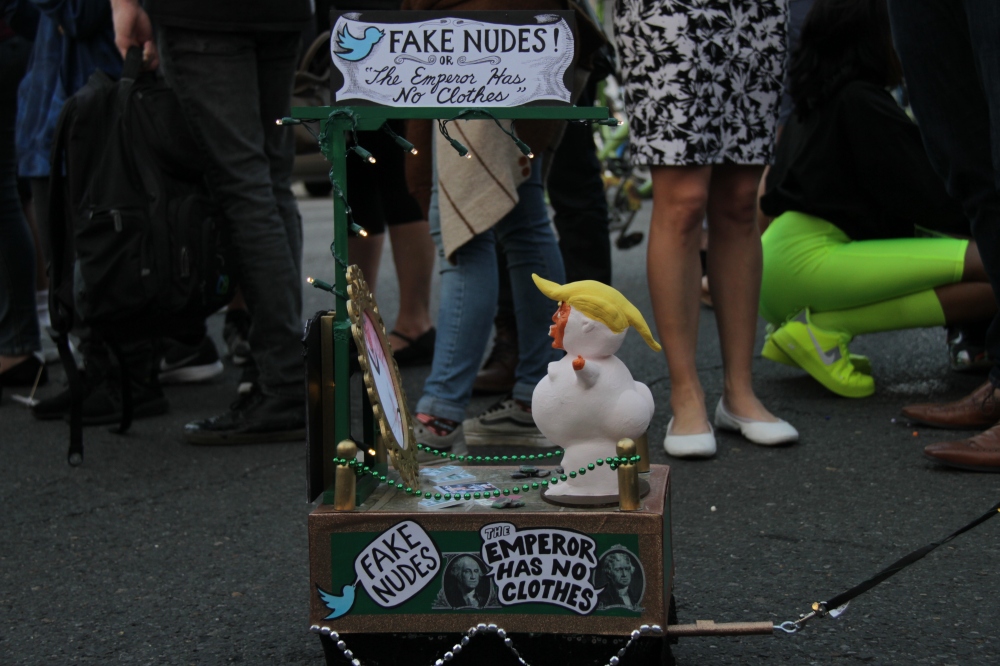 My favorite throw was this tiny Mister Roger’s poster, which is now laminated and lives on my fridge. (Because who doesn’t need a daily reminder that you’re special just because?)

PAWWWWTY!!! Think Mardi Gras is for the dogs? This is your parade! Dogs in costumes are THE BEST, and the Barkus dogs (some of whom are adoptable!) are walked on leashes, pushed in strollers and pulled on wagons, decorated according to an annual theme. 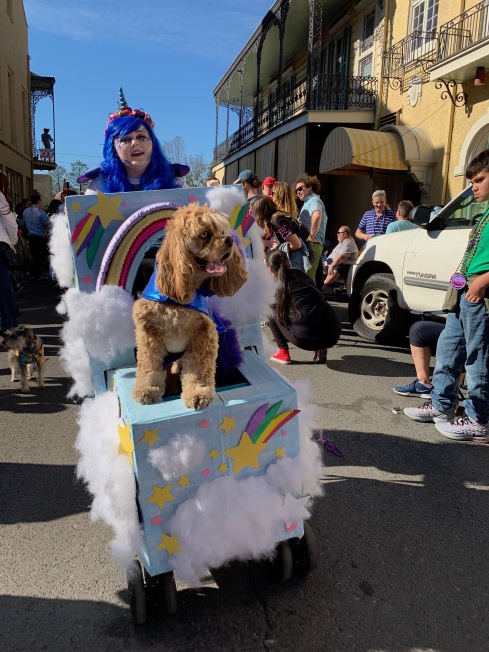 This year it was “The Big Bark Theory: Barkus Goes to Comic Con,” which meant there were loads of canine Wonder Women, some Flash Gordons, plenty of characters from Mario Brothers, Batman and Star Wars, and some old-school faves, such as the Alice in Wonderland crew, the Wizard of Oz crew and the Scooby Dooby Doo crew. (One high school marching band played the Scooby Doo theme song on repeat.)

My pup, Yoda, definitely brought on The Bark (terriers, anyone?), but he impressed everyone around him with his ability to bark on beat (with the bands) and his single-minded pursuit of treats. He was so relentless and scored so many treats that we filled a fanny pack and every pocket and gifted a treat to each dog we met on our walk home. Other throws include home-baked dog cookies molded to look like the distinctive New Orleans water meter covers, chew toys, stuffed animals (without dangerous beanie stuffing, so you know, perfect for gutting!), poop bags and my favorite, a squeaky plastic turd-pile. 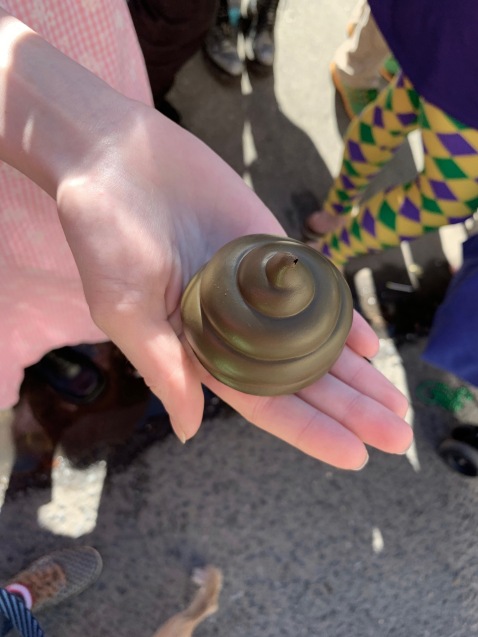 There are a few other walking parades (the women’s krewe,  Bosom Buddies, marches through the Quarter Friday at 11am, with their signature throw of decorated bras) and lots of bigger parades still to come.

If you want to keep up with the parade schedule and read about the history of each parade, this is a great site.