Hey New Orleans peeps and lucky NOLA Mardi Gras travelers—you officially have LESS THAN A WEEK to get your fill of all things KING CAKE!

And New Orleans is a quirky city, so it’s apropos that there are some quirky King Cake-themed food and beverage options on offer…but for a limited time only! I’ve gathered some resources below.

But first, because inquiring minds need to know: King Cake is not exclusively a New Orleans phenomena. It’s thought to have originated in Medieval France and Spain, as part of the liturgical Feast of the Epiphany. This Feast occurs the day after Twelfth Night (which is Jan. 5 or 6, depending on which church you ask) and is considered the night when the three kings (or wisemen, in some tellings) came to see the newborn Christ child.

In France, a “cake of kings” is basically a circular puff pastry filled with almond cream, fruit or chocolate and sometimes topped with a crown. In Spain, it’s a ring-shaped sweetbread topped with candied fruit, and in Portugal, it’s ring-shaped and filled with fruit or nuts. Belgium, Switzerland, the UK, Greece, Cypress and Bulgaria all have some version of a Twelfth Night cake or a cake with a trinket baked inside.

The trinket is actually thought to have its origins in an ancient pagan festival, Saturnalia, which used a bean hidden in a cake as an excuse to temporarily dismantle established social roles/ hierarchies. Back then, whoever got the slice with the bean was crowned king for a day.

The term “Mardi Gras” was first used in what would become Louisiana a few days before Fat Tuesday of 1699, when the French-Canadian, Pierre le Moyne d’Iberville, landed on the Mississippi river bank, 60 miles south of modern New Orleans. He named the bend Pointe du Mardi Gras. Masked balls began in New Orleans in the 1750s, and in the 1830s, revelers began to walk the streets and toss sugar-coated peanuts to onlookers. The first Mardi Gras parade krewe, the Mistick Krewe of Comus, was formed in 1857.

I keep reading online that the first New Orleans King Cake is thought to have been baked by French colonizers in 1870, but I can’t find any details or a source, so who knows?

Regardless, the purple, green and gold sugar-dusting is a distinctly New Orleans thing. These colors were adopted as official Mardi Gras symbols by Krewe of Rex, the second-oldest Mardi Gras krewe, in 1872. Purple stands for justice, green is faith, and gold is power. (FYI, Rex also pioneered the beads tradition, in 1921.)

The plastic baby found in more modern NOLA King Cakes originated in the late 1930s, at a now defunct (since 2000), widespread local bakery chain, McKenzie’s.  Supposedly McKenzie’s sold their recipe to Tastee Donuts, so Mardi Gras partiers can still get a general sense of what “traditional” New Orleans King Cakes tastes like.

Another fun factoid: Many New Orleanians disapprove of eating King Cake out-of-season, because urban myth is that it brings rain on Fat Tuesday!

Finally! Here’s Your Guide to All Things King Cake

Want to do something sweet with your sweets money? Get your King Cake from one of these nonprofits. A couple of weeks ago, I talked to the folks at Cafe Hope about how each King Cake order helps their students thrive.

King Cake indecision? Head to King Cake Hub at the Mystère Mansion, 4800 Canal St. in Mid-City. They’re open from 8am-6pm till Lundi Gras (Monday, March 4), with 34 different varieties on offer. (They’re closing at 2pm Sat., March 2, because of the Endymion parade, which goes through the neighborhood.) They have classics, such as Gambino’s, and neuvo-classics, such as Hi Do and Bywater Bakery. You can also find more innovative takes, such as a vegan King Cake, a tres leche King Cake and new-this-year, District Donut’s croissant King Cake.

Hellllooo novelty-seeking New Orleans local! Here’s a list of King Cakes that are new for 2019.

Prefer to sip your King Cake?  Or do you want a savory option or a King Cake beignet, pastry-puff, cinnamon roll or bread pudding? This list is for you.

Sugar with a side of (alcoholic) sugar? Here’s where to get your King Cake cocktails.

One slice wonder? Lots of bakeries and even some grocery stores sell King Cake by the slice. 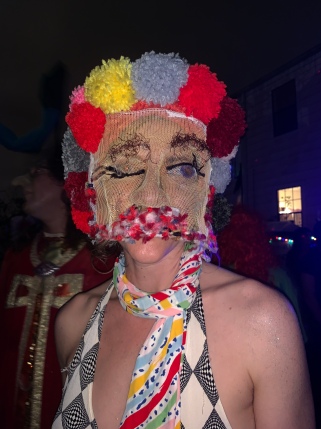 Bring Your Own Hot Glue!